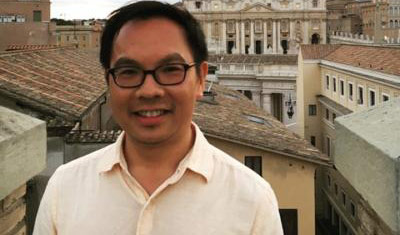 Ignatius of Loyola arrived in Paris on the 2nd February 1528, alone and on foot. I arrived on 27th June 2019, by aeroplane. A French Jesuit collected me by car. We drove through the busy traffic in the city and arrived at the Jesuit community at the Centre Sèrves, in the 6th Arrondissement. Ignatius arrived at the Latin Quarter, now the 5th Arrondissement. Standing in front of the Collège Sante-Barbe, this limping man found himself surrounded by students and teachers, merchants and monks. Here Ignatius lived here for seven years. It’s about a twenty-five-minute walk between these two places if one is quick on foot.

Unlike Ignatius, I had already been ordained a priest, albeit just a week or so before. Ignatius came to Paris, with the aim to study theology. I came to Paris to immerse myself in the French language and trace Ignatius’ footsteps. In my short month in Paris, two experiences left a lasting impression. Like Ignatius at Collège Montaigu, I was among younger students in the French language course. As I struggled with what felt like the almost impenetrable French grammar and syntax, I constantly thought of Ignatius. Despite his age, he had to start over in his studies, beginning with Latin and the humanities. Ignatius had to master Latin before he could enrol in the Faculty of Arts. I identified with Ignatius in my struggle with Latin and French, being requirements for my theological specialisation.

Towards the end of my language course at Centre Sèvres, a group of Jesuits spent a day visiting several Ignatian sites. Last on the itinerary was the former Crypt of the Martyrdom of St Denis in Montmartre, now a 19-century Crypt in its place. On 15th August 1534, Ignatius, Nicholas Bobadilla, Pierre Favre, Diego Laynez, Simão Rodriques, Alfonso Salmeron and Francisco Xavier pronounced their vows (in the now destroyed Crypt) as companions in the service of Christ. Favre, having already been ordained priest, presided at the Mass.

On our visit in July 2019, I was asked to preside at Mass since we were without a French priest. With my still broken French, I celebrated Mass with my Jesuit brothers, so near to where Ignatius and his companions took vows. On the left side of the Crypt chapel’s sanctuary, near the door to the sacristy, hung a large painting depicting the first companions taking vows. Even though I didn’t have the vow formula in hand at the time to renew my vows, my heart and mind were with our founder Ignatius and his first companions on that day in 1534. The spiritual and emotional connection to them and the place of their first vows was palpable. It was most certainly for me, even after 485 years, between the First Vows and my time in Paris. I came away confirmed by the mission that Ignatius and his friends in the Lord had begun that day.

Thank you to Andy Nguyen SJ for this contribution to our Erromeria Pilgrimage. Andy is an Assistant Priest at the Jesuit Parish of Our Lady of the Way, North Sydney, and the Ecclesial Assistant to NSW Christian Life Community. He is also an architect and liturgist, with particular interest in design of sacred space for greater participation in liturgical worship.