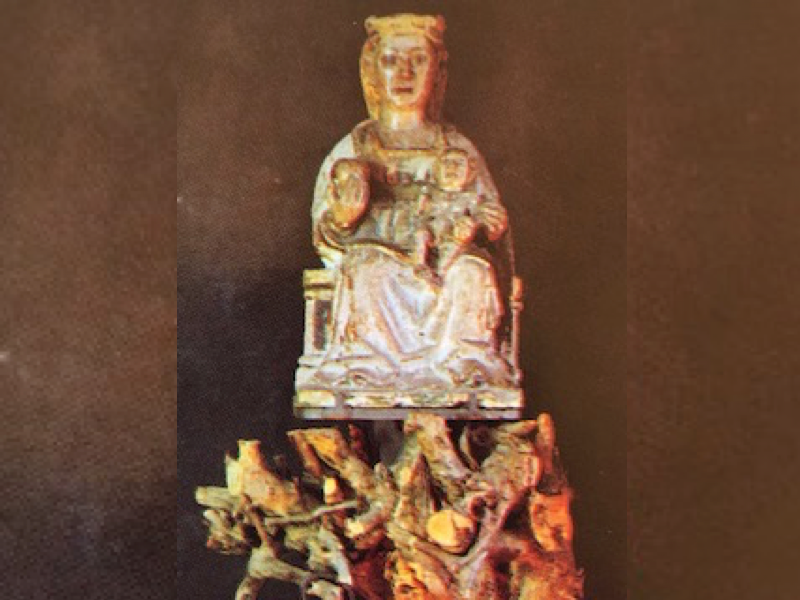 Margaret Strobl reflects on Ignatius’ ongoing awakening of love and devotion to Mary and the shrine of Mary at Aranzazu.

This month finds our pilgrimage, under Mary’s guidance, at Loyola, Ignatius’ home.

One can’t help thinking that Mary must have been waiting for this opportunity!

Now, at home, there would be Time!

Ignatius was home! Home to many brings memories childhood, of mother and all that might imply, peace, love, warmth, safety. But it cannot have been so for Ignatius. He had never really known his mother and had not spent his childhood in this house.

But here at home he would have Time!

He was broken and crippled. His eldest brother’s wife, Magdalena, was now the chatelaine. She provided the mothering and cared for him through all the terrible pain and recovery. Nine long months.

There was time. Plenty of it.

Time for healing after all the surgeries on his leg and then time for filling in time with reading and daydreaming. The only books available were from Magdalena, A Life of Christ, and a Lives of the Saints.
Ignatius began to read these over and over and slowly came to find they inspired him to want to emulate and surpass the deeds of these saints for Jesus. His daydreams of possibilities for his future in his former life as a courtier failed to give him the same excitement and satisfaction.

One night he had a vision of Mary with the child Jesus. This brought him so much lasting joy and peace that it confirmed for him that his future was to devote his life to her and her Son.

Time had been well used.

After Ignatius had regained his health and was able to walk again, he prepared to leave Loyola. His goal was to reach Jerusalem.
The first place he visited after leaving home was a shrine of Mary at Aranzazu also in the mountains of his Gipuzkoan homeland.

Not many years before Ignatius’ birth, a shepherd had found an image of Mary in a thorn bush here. His exclamation of “Arantzu zu?” (You? Among the thorns ? ) gave the place its name according to the legend.
The fact that Ignatius chose to visit Mary and make a vigil here before setting out on his quest to the Holy Land is tangible evidence of the role she will play in his new life.

As far as an image is concerned, there is a picture of the vision at Loyola taken from the diorama at the Casa Loyola in the article by Xavier University.

Mary, the hidden Catalyst : Reflections from an Ignatian Pilgrimage to Spain and Rome.

Thankyou to Margaret Strobl for this contribution to our Erromeria Pilgrimage.  Margaret is a giver of the First Spiritual Exercises and member of the Sydney Metro FSE team.