I have fought the good fight

The Spirit Hovers over Creation

Inflamed by my experience of the Ignatian Spiritual Exercises and Arrupe Programme, I desired an even deeper knowledge of St Ignatius. While surfing the Net, I fortuitously discovered a Jesuit who, as Parish Priest in an LA neighbourhood with the highest rate of gang related murders, had chosen to break their cycle of violence and incarceration through education and employment. Wow! Here was a Catholic Priest authentically ministering to first world tattooed gangsters in an alienated culture whose dress, looks, attitudes and music was revered by the majority of senior students whom I was attempting to teach religion in an Australian Catholic Co-Ed College.

“We go in by their door, in order to come out by ours,” is the sense of a genuine encounter that St Ignatius had in mind when he spoke of Jesuit missionary activity. How excited was I to share the numerous Homeboy YouTube clips with my disenchanted students, that captured the thrust, vibrancy and Christ centred goals of Fr Greg Boyle SJ? My journey of awareness about deprivation and poverty, strategies for realignment with mainstream society and redemption through Ignatian Spirituality had begun. 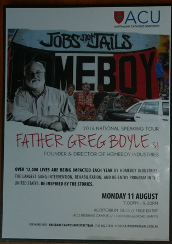 To meet Fr Greg in person, in Brisbane, was an unanticipated privilege and pleasure. During his 2014 nationwide ACU campus speaking tour of Australia, Fr Greg retold stories of ministering to the primarily Latino community of Boyle Heights and the evolution of Homeboy Industries as foundational to the neighbourhood’s transformation. When asked of a homeboy type organisation being established in Australia, Fr. Greg insisted he had no interest in establishing a world wide McDonalds’s type franchise centred on his LA HQ. Instead they inaugurated the ‘Global Homeboy Network,’ a three-day International Conference to assist social justice agencies with a similar focus to observe and learn strategies underpinning the LA Homeboys model.

An LA stopover had been planned en route to my son’s 2016 Czech wedding for me to observe first hand features of this ministry that had so fascinated me. Incredibly, or by ‘holy coincidence,’ our four days in LA coincided with the Homeboy Global Network conference providing me not only the opportunity to reacquaint myself with Fr Greg, but also to attend Sunday Mass at the Dolores Mission in Boyle Heights as well as visit the Homeboys HQ in downtown LA as the conference opening event. 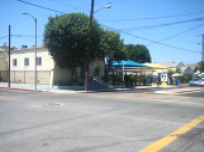 You may also like to watch the following 20-minute documentary on Homeboy Industries effort to transform LA’s alienated victims.

(Image in text body by Steve Jorgensen from his visit to Homeboy Industries, Cover image: smartbrief.com)

We stand today……with the family of George Floyd as they hold services for him in Minneapolis. We remain horrified that in 8 minutes and 46 seconds, his life was snuffed out by police officers in the light of day. We hold George’s family in our broken hearts.

This tragic event and the COVID-19 crisis both have revealed fault lines. Both have exposed structural racism in health care, in our economy, in criminal justice and in the immigration system. Our nation was ailing long before these disparities and inequities became writ large. Never before have we seen so starkly the need for radical changes in the social contract.

We are wide-eyed about the fact of our “original sin”…that this country was founded on genocide and slavery and has perpetuated this sin through Jim Crow, redlining, police brutality that criminalizes poor communities of color and in the intense militarization of law enforcement to keep these same people down.

Two days ago, I marched with hundreds of others on Hollywood Blvd. I was stunned by the diversity of folks and yet, was struck by the fact that I was clearly the oldest person in view. I couldn’t find another geezer. Young people have been galvanized to put first things recognizably first. This was heartening. I was proud to stand with them, to stand with Black Lives Matter and to stand for the radical kinship that has been our hallmark at Homeboy.

For over 32 years, Homeboy Industries has stood in the right place, with the poor, the powerless, and the voiceless. We have stood with those whose dignity has been denied. We have stood with the easily despised and readily left out. We continue to stand with the demonized so that the demonizing will stop. And we stand with the disposable, so that the day will come when we stop throwing people away. We will continue to stand at the margins as we always have – this is and will continue to be our daily work.

On Saturday, I will bury my 234th young person killed in our streets for no reason at all. In all these years, I’ve buried over 30 young lives, killed by law enforcement. So along with standing with our black brothers and sisters, we join Black Lives Matter in seeking to re-imagine policing, and how public funding for law enforcement can be better aligned with the needs of those on the margins. On this point, we support all efforts to re-prioritize public budgets to shift resources to the poor and protect them in real ways.
We want to end the further intergenerational trauma directly caused by racism. With this, we will continue to seek the de-population of jails, to dial down the primitive machinery of the criminal justice system and to see mass incarceration in our rear view mirror as a thing of the past. We are emboldened by the fact that so many people from all backgrounds and beliefs support this view – a much different sentiment than 32 years ago.

There is an idea that has taken root in the world and it is at the root of all that is wrong with it…and the idea is this: that there just might be lives out there that matter less than other lives. Homeboy Industries has always stood against that idea and we always will.

Beyond all that, we find hope in this struggle and in the unshakeable goodness of all people. We all long for the exquisite mutuality made palpable and real in the halls of Homeboy and in the hugs…we will one day be able to exchange again.

My love for you knows no bounds. My hope in your ability to draw our family circle as a global Homeboy community even more wide, spacious and inclusive…is total. This time of pandemic and the tragic murder of George Floyd is a doorway. Let’s walk through it together.

Please note the global Homeboy network will be online in August 2020 due to COVID  see https://homeboyindustries.org/news-events/events/global-homeboy-network-gathering/ for more information.