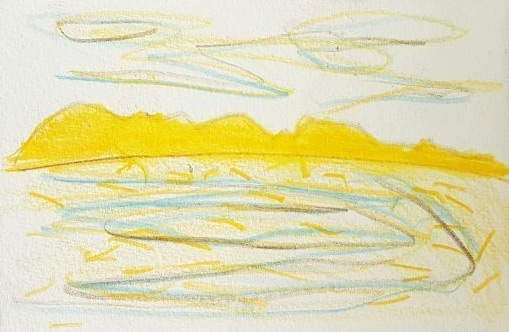 Ignatius: A View from Manresa

Ignatius spent some months in 1522 praying in a cave on the edge of Manresa and composing the spiritual exercises in his notebook drawing from his experiences. The cave overlooks the narrow but rapid Cardoner River and has a view to the Monserrat range dominant on the horizon. This daily view would have served as a reminder of his pledge before the Madonna.

Earlier that year Ignatius, the pilgrim soldier, had laid his sword at the feet the statue of the Madonna at Monserrat, after a vigil of prayer and placed himself under the banner of Christ.

“Jesus’ call goes out to all peoples, yet he specially calls each person in a particular and unique way.” [95]2 S.E.

Ignatius then walked for a day across the fields to Manresa where he lived for 10 months. He begged for his keep, eating herbs from surroundings, and only accepted meat and a little wine on Sundays.

For a while, to punish himself for his past vanities, he went to extremes and let his hair and nails grow long and unkempt.

“Our only desire and our one choice should be this: I want, and I choose what better leads to God’s deepening life in me.” [23] S.E.

He experienced often what he described as a beautiful apparition that at first gave him joy but then left him feeling terribly sad and agitated. An inner voice suggested that the life he had just begun was impossible to maintain for 60 plus years. He expelled this temptation with the thought “Can you, wretched one promise me one hour of life?” and then experienced peace.

Hearing Mass daily and assisting at Vespers and Compline was a source of consolation and reading over the history of the Passion filled him with joy and calm. During this time, he helped in a hospital for his food and lodging.

“For is it not knowing much, but realizing and relishing things interiorly, that contents and satisfies the soul” [2]5 S.E.

He began noticing new extreme changes in his soul alternating from consolation to desolation which caused him to question the life he had entered.

“Let him who is in consolation think how he will be in the desolation that will come after, taking new strength for then.” {323] S.E.

He came to know some holy people who expressed confidence in him. He was helped by a well-respected older woman who said to him one day “Would that the Lord Jesus might appear to you one day!” He wondered what Jesus would look like if He did.

“When we find ourselves in a time of temptation or desolation, the director is meant to be a kind listener and a gentle support” [7]7 S.E.

For a while he would confess his sins excessively, listing them repeatedly, praying on them extensively, scourging himself, fasting, pleading with God, and yet still feeling tormented by scruples even though he knew them to be trivial. The extent of it brought him to near despair. Gradually he began to learn from God the discernment of spirits and eventually was delivered from this interior turmoil through the “will of our merciful Lord”.

“In the first week it often happens that we will be tempted to discouragement or rejection by thoughts about our unworthiness before God, to a despair about the costs of such a loving response…” [10]10 S.E.

Ignatius developed a daily pattern of seven hours prayer, assisting people who came for advice and for the rest of the day devoting his thoughts to God, reflecting on his prayer and reading. On resting at the end of the day, wonderful insights came to him, and his sleep was interrupted. Pondering this he concluded that he had given enough time in conversation with God and his sleep was necessary and the illuminations were not from the Good Spirit.

“…we may well be tempted so to prolong the period of prayer that soon we find ourselves responding to the consolations more than to God. At such times, the observance of the set hour is a safeguard…” [13]13 S.E.

One day he found himself invited by a vision of meat to break his resolution not to eat meat and his confessor rightly suggested he might examen if he was being tempted. Ignatius recognised that God was teaching him though this experience.

“The most important qualities in the person who enters into these exercises are openness, generousity and courage towards their Creator and Lord, offering all their will and liberty”.

Another time he had a vision of the Holy Trinity. The consolations or joy afterward were great and continued whenever he prayed to the Blessed Trinity.

Also, through a vision he was given understanding of how God had created the world. He received many consolations and visions during this time and was given fruitful insights for others and gained strength. Ignatius gave up his rigorous penances and began to trim his hair and nails.

One day on the way to St Paul’s church near Manresa he sat on the bank of the Cardoner, gazing at the deep waters. “While seated there the eyes of his soul were opened. His mind was enlightened on many subjects, spiritual and intellectual” (Autobiography) Such was the clarity of knowledge that everything appeared to him in a new light, with a magnitude not equalled in the total of his life.

He was from that point on a changed person with new understanding and discernment. A recurring apparition was now recognised as not from God and shooed away with his staff.

“Spiritual Consolation…when we find ourselves so on fire with the love of God that we can freely give ourselves over to God and there is no competition with any human person or any created thing. Rather we begin to see everything and everyone in the context of God, the Creator and Giver of all good gifts.” [316] S.E.

Thank you to Kerry Holland for this contribution to our Erromeria Pilgrimage. Kerry is an artist and Ignatian Spiritual Director who gives the Spiritual Exercises with the JISA Faber team in Brisbane. She facilitates an Art and Justice Project in her parish. With her husband, Kerry delights in their adult children and young grandchildren. 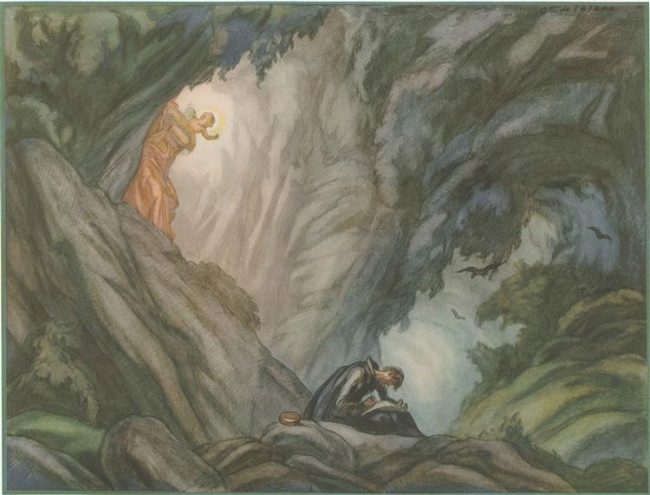